Posted by Stacy Podelski on February 9, 2015 in New York Sports 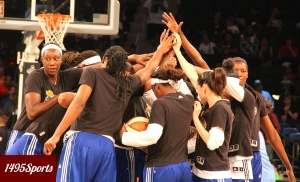 “Over the last four seasons, Alex has developed into a lock down defender with a nice three-point shot. We are expecting her to be a key piece for us moving forward.” said Bernert. “Avery and Natasha were solid contributors at the end of last season, and they earned their return.”

“We are excited to have these three veterans return for next season,” said Head Coach Bill Laimbeer. “They are familiar with our style of play and will be important for continuing to build the culture of our franchise.”

Montgomery, a four-year veteran of the WNBA, has spent her entire career with the Liberty. She averaged 5.3 points, 3.9 rebounds and 1.0 assists per game in 2014. Over the previous two seasons, Montgomery is averaging career highs in points (5.6), rebounds (4.6) and assists (1.3) over the last two seasons.

Warley-Talbert, a 6-3 center, is entering her fourth season in the WNBA and second with the Liberty. She averaged 4.2 points and 3.8 rebounds per game in 2014.

Lacy has completed five seasons in the WNBA. A 5-10 guard, she is averaging 4.4 points and 2.1 rebounds per game over her career. Lacy joined the Liberty as a free agent in 2014, appearing in 11 games for New York.

The Liberty will open the 2015 regular season on Friday, June 5 at 7:30 p.m. at Madison Square Garden against the Atlanta Dream.

For more information on the New York Liberty fans are encouraged to click on the link seen here: