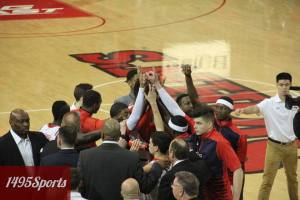 Leading by 15 at the intermission, the St. John’s Men’s Basketball team withstood a series of second-half runs from Marquette on Sunday, holding off the Golden Eagles, 75-73, at Fiserv Forum and winning its fourth straight decision.

The Red Storm (11-7, 5-6 BIG EAST) closed the month of January by winning four in a row and five of its last six overall. Included in that four-game stretch were three BIG EAST road wins, marking the first time since 2014-15 that the Johnnies have won three consecutive conference contests. Prior to this afternoon, the Red Storm had not registered a three-game winning streak on the road in BIG EAST play since topping Cincinnati, DePaul and Rutgers during the 2012-13 campaign.

The Johnnies have now matched their BIG EAST regular season win total from all of last season in just 11 conference games.

Marquette shaved its deficit down to one three times in the final four minutes, but the Johnnies had an answer every time. With 1:32 to go and the Red Storm leading 69-68, Posh Alexander picked the pocket of D.J. Carton at midcourt and laid it home. Less than 30 seconds later with the Red Storm cushion back down to one following a pair of Golden Eagle free throws, Dylan Addae-Wusu drove the lane and made a difficult layup through contact. Rasheem Dunn provided the final heroics, draining a pair of free throws to make it a four-point game with 21 seconds left before recording the game-saving steal with less than a second to go.

The leading scorer in the BIG EAST, Julian Champagnie led the way for St. John’s with 22 points on 7-of-14 shooting, including a 4-of-7 effort from beyond the arc. Champagnie, who also grabbed a team-high seven boards, has reached double figures in all 16 of his appearances this season with seven 20-point efforts.

Alexander finished with 15 points, three assists and a season-high six steals in 34 minutes of action. His half-dozen thefts are tied for the single-game high by a BIG EAST player this year.

Dunn tallied 11 points for the third time in his last four games and three assists.

Vince Cole was the fourth Johnnie to reach double figures, scoring all 10 of his points in the first half and dishing out a team-high four assists.

Addae-Wusu had six points and five boards in 20 minutes.

After allowing 86.2 points per game in their first six BIG EAST games, the Johnnies have allowed no more than 73 in any of their last five conference contests.

After Marquette scored the game’s first five points, St. John’s responded by scoring seven straight and 28 of the game’s next 36 to make it 28-13 near the midway mark of the half. The Red Storm’s run was anchored by a strong performance from the three-point line, as the Johnnies went 6-of-9 from deep in the game’s first 10:02. Champagnie and Cole drained two apiece during that stretch.

Following a timeout, the Golden Eagles responded with a 9-2 run to cut the St. John’s lead to single digits, 30-22, with just under seven minutes remaining.

The Red Storm lead remained in that neighborhood before the Johnnies scored six points in a span of eight seconds to close the half. Alexander found Champagnie for a triple before stealing the inbounds pass and converting on an old-fashioned three-point play.

St. John’s let its 15-point halftime lead slip away, but the Red Storm never trailed after falling behind 5-3 with 1:21 gone in the first half.

The Johnnies will return to action on Wednesday, playing host to No. 3/3 Villanova at Carnesecca Arena. Tip-off is set for 9 p.m. on CBS Sports Network.

“What a gut-check for our guys. We always talk about ‘no guts, no glory’. With that being said, I thought that Marquette made a run in the second half and we played it as well as we could have. We did a good job of sharing the basketball. Defensively, I thought we were disruptive. … You have to give them credit, it was very similar to the game at our place. … Obviously, Dylan [Addae-Wusu] makes a big shot for us and I thought he took some contact going to the hole. Rasheem [Dunn] made some big free throws and even got to the point where he made the big steal there at the end, but again it was a total team effort. Our bench continues to play well, they scored 13 to their zero and there is a difference. Again, this team is starting to find its identity and that is our defense. Offensively, we had four guys get to double figures in scoring and those are the guys who start the game who helped give us some balance.”

On the play of Dylan Addae-Wusu and Posh Alexander…

“They are growing up. It looked like they were battle-tested and had been in the fire. You have got to remember that we played a game against Marquette that went the opposite way. The steal that Posh [Alexander] got and the basket was huge. Marquette came back and scored, of course. Then, Dylan [Addae-Wusu], he is better than anyone I have had at getting downhill in terms of north and south and getting to the basket and what a finish that was. He had three field goals, but that was a big one. … When you talk about freshmen playing that way, it tells me they are getting better.”

On the current confidence level of the team…

“I think our guys are connected offensively and defensively and trusting one another. Just think about the last play. Everyone wants to talk about the “go-to” guy, and [Julian Champagnie] had the ball in his hands and made the pass. He trusted Dylan [Addae-Wusu] to go and make a play. … We are taking more charges than we did earlier in the year. Guys are understanding their roles and what they can bring to the team. Even Josh [Roberts], he played 11 minutes, but his presence was big. He had a big shot block there in the second half when we were kind of reeling a little bit. So I think it is a combination of guys playing in meaningful games and now they know what to expect from each other.”

On the play of Rasheem Dunn…

“As you have seen, we start making runs and he is the catalyst in all of that. He calms the guys down and I think that guys are even taking to the captainship of our basketball team. … Rasheem is one our leaders. … Rasheem is playing at a high-level for us and playing good minutes. He is a fifth-year guy and that is what you expect from a fifth-year guy.”

“Right before the game I talked to the guys about when we played at our place we left some plays out on the floor. My statement to them was “Did you learn from it?” This was their opportunity to show me that they learned from it. Before the game, they were telling me all the things that they had to clean up and saying ‘Coach, we have to do this and have to do that.’ It was the little hustle plays. I thought that in the first half, we came up with every loose ball and outrebounded them. That didn’t happen at our place. We were more physical with them. This team is getting better and that is the biggest thing, I think they are following my lead and that is a good thing.”

On the opportunity that Wednesday’s game against No. 3/3 Villanova presents…

“Well, again, I know it is cliché but enjoy it until midnight and then we turn our attention to a team that could win it all and we have a chance to play it at our place. So it is next game up and it is the biggest game on our schedule.”

On if this game was a revenge win…

“The win was great. When we were on our way here, we just knew we were coming to win. They came to our house and basically stole one, so us coming in here and winning today is just amazing and everybody is happy about it.”

On having Rasheem Dunn as a mentor…

“It is great having Rasheem [Dunn] on the floor because he makes smart decisions and he makes plays for others just like me. Having him as a mentor is great because he is a senior and he is basically showing me how things go. I am so grateful to have him as a leader on our team and as a person I can look up too.”

On his steal with a minute to go…

“That steal was kind of personal because when I was guarding him, actually one-on-one at the top of the key, he scored [on a previous possession]. … In my head [I thought] ‘I can’t believe he did that’. So I actually took that personal. I saw him coming off the screen and took it and went for the layup. I assumed he was going to chase me down and cut me off, so I just floated it off the backboard.”

On the excitement for the matchup with Villanova

“I personally feel like we are going for a win and that should be our motivation for every game. It’s one game at a time, so Villanova is coming into our house next and we are looking to beat them.”

On finding ways to win…

← Updates from the Buffalo Sabres as the team has day off before taking on Islanders
Alexander, Champagnie Honored by BIG EAST for their fine play →