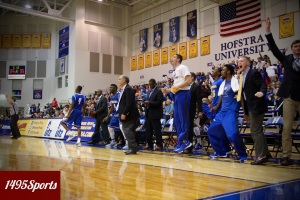 Senior Jalen Ray had another big outing with a game-high 23 points to lead the Hofstra men’s basketball team to a 68-67 victory over Delaware on Sunday afternoon at the Bob Carpenter Center. Sophomore Caleb Burgess established a new career-high with 17 points in the contest to help the Pride to the victory.

Hofstra led wire-to-wire in moving to 7-6 on the year overall and to 3-3 in Colonial Athletic Association action. Delaware slips to 4-6 and 2-3 in conference play.

Hofstra got off to an incredible start in the contest as the Pride scored the first 13 points of the game to lead by that score nearly four minutes in. It was a total team effort for the visitors as five different players scored during the run with Burgess leading with four points.

The lead would stay in double figures the entirety of the opening stanza with the Pride pushing the lead to as many as 20, 39-19, with 3:11 left before the break following a Burgess basket. It was a quick 6-0 run that got it to a 20-point lead as senior Stafford Trueheart drained a jumper before two buckets from Burgess assisted in the run. The Pride would eventually take a 13-point lead into the halftime break.

Delaware scored the first six points of the second stanza to close the gap to seven, 41-34, with 17:28 on the clock following a layup from Ebby Asamoah. Hofstra was able to push the advantage back to 10 just over a minute later as senior Tareq Coburn nailed a three-pointer to make it 46-36 at the 15:56 mark.

The Pride was able to extend the lead back to 15 later in the half as they used a 10-3 run to make it 62-47 after an old-fashioned three-point play from freshman Kvonn Cramer with 7:58 to play. Delaware gradually chipped away at the deficit and used a 20-6 run over the next seven minutes to make it a one-point game, 68-67, with 50 seconds to play after a basket from Dylan Painter. After an empty possession by the Pride, Delaware had one final possession to earn the win but great defense on the final play by the Pride stopped the Blue Hens from getting a shot off and Hofstra would hold on for the win.

Cramer chipped in with nine points and eight rebounds for Hofstra, which also got eight points from Coburn and seven from junior Isaac Kante. Trueheart played his first extended minutes of the season and had four points, three blocks, and two rebounds in 16 minutes. Burgess added six rebounds, five assists, and three steals.

Andrew Carr had 20 points and six rebounds for Delaware, which also got 17 points and 15 rebounds from Painter.

For more information on the Hofstra University Athletics Department fans are encouraged to click on the link seen here: