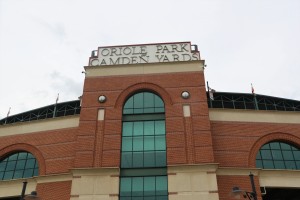 It was a moving Opening Day at Oriole Park at Camden Yards as the Baltimore Orioles (2-2)  played host to the New York Yankees  (3-1) on a day where more then just the final results mattered, it was about the spirit of the team and this country during these new times. The team itself had a moving Opening Day as they honored superfan Mo Gaba as well as all battling in the front lines during the coronavirus pandemic.

Without any fans in the stands the Orioles were able to hang tight with the New York Yankees but did fall by a final score of 9-3. New York used three early home runs to give them the lead that combined with a rough outing on the hill by the Baltimore relief pitchers led to the final result. It was  Baltimore’s 17 consecutive loss to the Yanks and 16th straight at home dating back to 2018.

Asher Wojciechowski made his season debut on the hill for Baltimore striking out seven but was charged with five runs (four earned) in five innings, was just struck hard by a very good New York Yankees offensive batting order. Baltimore was able to climb back into the game via a two-run home run by Dwight Smith Jr, but sadly the Yankees were able to shut down the Orioles offense and walked away with the victory.

Jose Iglesias has been a bright spot so far for Baltimore holding an 8-for-16 (.500) mark at the plate with four doubles after connecting for a first-inning RBI double off of Gerrit Cole.

Baltimore has been making some moves already as according to reports on Wednesday the team was able to add top pitching prospect Grayson Rodriguez to their 60-man player pool. The right handed pitcher has been assigned to their alternative training site in Bowie, Md. Rodriguez who was the club’s Number 2 prospect per MLB Pipeline was a candidate to be added to the player pool, which now stands at 56 players.

Rodriguez, 20, just completed his first full professional season at Class A Delmarva holding a 10-4 record with a 2.68 ERA in 20 starts, striking out 129 in 94 innings.  The righty was the 11th overall pick in the 2018 Draft was scheduled to begin this 2020 Season at Class A Advanced Frederick before the Minor League Season was cancelled due to the coronavirus pandemic.

Baltimore’s future sure looks bright so far as the team now has eight of their top 10 prospects from the Top 30 list in the fold for the alternate summer camp that will be held in Bowie. Rodriguez will join the likes of No. 1 prospect Adley Rutschman, No. 3 lefty DL Hall, No. 4 slugger Ryan Mountcastle and others.

There has been so many schedule changes for the Orioles that includes the game today (Thursday) against the Yankees at Camden Yards. The contest is scheduled for 7:05 p.m. instead of 7:35 p.m. The Orioles will send out lefty John Means to take on J.A. Happ in what should be a tremendous pitching matchup.

Means during his 2019 Season holds a 12-11 record to go along with a 3.81 ERA striking out 125 batters in 158 innings pitched.  It’ll be the season debut for Means who went up against the Yankees twice in 2019 in games played on August 7 and August 13. In the August 7th outing Means pitched 3.2 innings and struck out five batters, while in the August 13 outing the lefty also went 3.2 innings but struck out one player.

For more information on the Baltimore Orioles fans are encouraged to click on the link seen here: