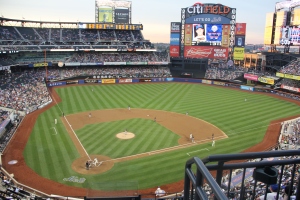 Citi Field was able to get an exciting new prospect to don the Orange and Blue, with the New York Mets signing multiple draft picks to the squad today.

The first addition to the squad was that of RHP J.T. Ginn, the team’s second round selection (52nd overall pick) from the 2020 First-Year Player Draft.

Ginn, 21, from Mississippi State, was ranked among this year’s top draft prospects by Baseball America (No. 23) and MLB  Pipeline (No. 44). His pitch arsenal is highlighted by a fastball that reaches the mid-to-upper 90s and a hard slider with mid-80s velocity. He was previously drafted by the Los Angeles Dodgers (30th overall, 2018) after being named the Gatorade Mississippi Player of the Year as a high school senior.

The Brandon, Mississippi native made one start for the Bulldogs in 2020 before undergoing “Tommy John” surgery in March to repair an elbow injury that sidelined the right-hander in his season debut. In 2019, he was named the Perfect Game National Freshman of the Year after putting up a 3.13 ERA in 17 starts with 105 strikeouts and just 19 walks in 86.1 innings.

Walters, 22, hails from Corona, California, the same hometown as compensatory pick Isaiah Greene. He was hitting .271 (16-59) with eight runs scored and eight RBI in 16 games for San Diego State this year before his season ended due to the pandemic. The 6-1, 185-pounder earned first-team all-state honors from the California Community College Baseball Coaches Association after batting .374 with 10 homers and 62 RBI in 45 games with Mount San Antonio College in 2018.

In addition to catching, Dyer, 21, played defensively all over the diamond while at Arizona, appearing at first base, second base, third base and in the outfield. The 6-4, 187-pounder hit three homers and drove in 18 runs in in 15 games with Arizona this year. He began the year as a 2020 National Collegiate Baseball Writers Association First-Team Preseason All-American. Dyer batted .393 (66-168) with 46 runs scored, 10 doubles, four triples, four homers and 28 RBI in 42 games to earn Pac-12 All-Conference Honorable Mention as a sophomore in 2019.

Orze, 22, sported a 17-3 strikeout-to-walk ratio in 12.2 innings this season before COVID ended the campaign. He is a two-time cancer survivor and sat out part of 2018 and missed the entire 2019 season to recover after beating both testicular cancer and skin cancer. Baseball America listed Orze as a one of 10 draft sleepers to know.

Rumors have it that the Mets will be having their camp at CIti Field prior to the start of the season, so it’ll be a great way for the guys to get some experience on the field.

McIlwain, 22, a two-sport star at Cal-Berkeley The 6-1, 205-pound outfielder made 15 starts for the Golden Bears this year and scored seven runs, drove in four runs and had four stolen bases before Covid-19 ended the season. McIlwain was selected by Miami in the 26th round of the 2019 First-Year Player Draft, but elected to return to Cal. He slashed .258/.309/.435 in 20 games in 2019. McIlwain appeared in 10 games and made two starts for the Golden Bears football team as a sophomore in 2018, throwing for 763 yards and two touchdowns and rushing for an additional 403 yards and four touchdowns. The Newtown, PA native started his collegiate career at South Carolina as a member of the baseball and football teams. He made three starts as a freshman for the football team in 2016. McIlwain was rated the 16th-best high school prospect in 2016 by Baseball America.

Davidson, 23, didn’t allow a run or a walk over 5.1 relief innings with eight strikeouts at Tennessee this year. In 2019, he helped lead Walters State to the NJCAA College World Series going 6-2 with two saves in 15 outings with 64 strikeouts in 46.0 innings.

Nightengale was named a 2020 Collegiate Baseball Second Team Preseason All-America and 2020 Sun Belt Conference Preseason Pitcher of the Year. The 6-0, 195-pounder recorded 39 strikeouts in just 23.1 innings as a senior at South Alabama. Nightengale posted a 3.09 ERA (eight earned runs/23.1 innings) in those four starts. He led the Sun Belt Conference in opponents’ batting (.196), was fourth in ERA (3.52) and strikeouts (91) after pitching 71.2 innings in 2019.

Hall, 22, went 4-1 with a 3.00 ERA (10 earned runs/30.0 innings) over five starts this year with Central Oklahoma. He racked up 45 strikeouts and issued eight walks. The 6-5, 225-pounder set a single-season school record with 123 strikeouts in 106.1 innings as a junior in 2019. Hall appeared in 34 games with Virginia Tech as a freshman and sophomore before transferring.

Faith made four starts for Lamar University as a junior, working 14.1 innings this year. The 6-6, 200-pounder went 15-4 with 143 strikeouts over 138.1 innings and a 3.84 ERA in two years at Navarro Junior College before transferring to Lamar.