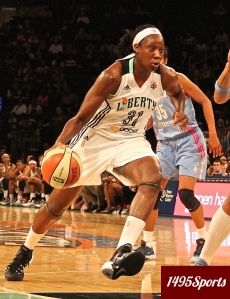 The New York Liberty led the Los Angeles Sparks by as much as nine in the first half, and they entered the break with a six-point advantage. But the Sparks (19-13) would go on to outscore the Liberty (7-24) 36-22 in the second half as they pulled out a 74-66 victory at the Staples Center on Tuesday night.

New York got off to a hot start on offense, shooting 52.9 percent from the field in the first quarter. Tina Charles led the charge with 11 points in the frame. The Sparks matched them basket for basket, however, as the quarter saw eight lead changes.

The Liberty built a lead in the second quarter, before watching it disappear in the second half. It is the sixth time in the past seven games that New York has entered halftime either tied or with the lead before eventually falling.

Charles finished with a team-high 21 points, shooting an even 50 percent from the field. It was her fourth straight game with at least 20 points, and her 16th on the season. The veteran contributed seven rebounds as well.

Kia Vaughn notched 11 points in the contest, her highest scoring total since July 1. She also chipped in a team-high eight rebounds. Bria Hartley joined Charles and Vaughn in double figures with 10 points off the bench, including a pair of threes.

The loss continued a season-long 10 game skid for the Liberty. They do not have to wait long for a chance to right the ship— the face the Las Vegas Aces tomorrow night. Tipoff is set for 10:00 p.m. (ET) at the Mandalay Bay Events Center.

For more information on the New York Liberty and for tickets to upcoming games fans are encouraged to click on the link seen here:

← Athletes In Your Community Spotlight as WWE and Nets stars bring smiles to the children of the Brooklyn Hospital
New opponent for comebacking 3-time, 2-division world champion Jose Antonio Rivera →