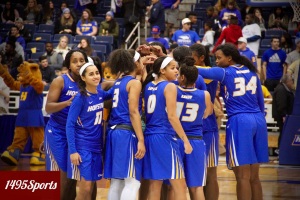 The Hofstra University Women’s Basketball team won the unofficial “Battle of Long Island” with a 71-66 win over Stony Brook at the Mack Sports Center. Kelly Loftus led all players with 26 points including 6-of-10 from three-point range, while Ashunae Durant added 16 points and 15 rebounds.

The Pride improved to 2-0 on the season with another hard-fought, total team effort. “We’re a team that pulls together and I think that’s something that separates us from other teams,” explained Hofstra Head Coach Krista Kilburn-Steveskey. “I’m very proud, top-to-bottom with this crew.”

Loftus was a factor early, hitting a pair of three-pointers in the opening minute of the game to establish the outside shooting option for the Pride. Outside shooting was a key for Hofstra in the early going.

“DK [assistant coach Denise King] helped with me with my shot before the game today,” Loftus explained. “I thank her for that because if she didn’t help me I don’t think my shot would have been on tonight. My teammates found me at the right time and I just knocked it down.”

Hofstra took the lead with 4:07 remaining in the first quarter on a three-point shot by Sydni Epps and never trailed again for the rest of the game.

Stony Brook had some success in the paint in the first half, outscoring the Pride 22-12 down low, but Hofstra made some adjustments defensively and were able to slow down the Seawolves inside attack in the second half. Brittany Snow led Stony Brook with 22 points for the night.

“We did try to get creative,” Kilburn-Steveskey said. “Sometimes we went to a 2-3 [zone]. The more we can change things up [on defense] the better and I think this is the practice that we need…We did a good job of playing off screens in the second half.”

The game was marked by a lot of tough, physical play. Hofstra won the battle on the boards, outrebounding Stony Brook 38-36, but they owned a vital 16-8 advantage on the offensive boards which was able to turn the advantage into second-chance opportunities to score points.

“It was very physical down there,” Durant said. “Brittany Snow and their other five player are bigger than me, but we came out with more rebounds than them. Hey, it is what it is.”

Hofstra led at halftime 36-30 and then pulled away in the third quarter, increasing the lead to as many as 13 points.

To their credit, Stony Brook hung tough and made a fourth quarter run to pull to within as little as two points, but was never quite able to even the score. The Hofstra defense was a big reason for the win. Darius Faulk had another strong defensive game and made a key steal with just over five minutes left and then set up Durant for an open jumper that gave the Pride a five-point lead.

Loftus came through in the clutch late when she connected from behind the three-point line with 36 seconds left to again open up a five-point gap. Krystal Luciano made a key free throw with 14 seconds left to make it a two-possession game and ice the win for the Pride.

Hofstra returns to action on Thursday night when they face American University in Washington, DC. It will be the first road game for the Pride this season.

The Women’s Basketball team will return to the Mack Sports Complex on Thursday, December 3, when they take on the University at Buffalo.

For more information on the Hofstra Women’s Basketball team fans are encouraged to click on the link seen here: