Posted by Stacy Podelski on July 28, 2015 in New York Sports 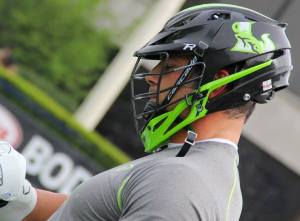 Major League Lacrosse and US Lacrosse have awarded New York Lizards’ Greg “Beast” Gurenlian with the USL/MLL Sportsmanship Player of the Year Award. The voting was directed by the league’s game officials.

Gurenlian, a faceoff specialist for the Lizards, had a career year where he set records for faceoff wins, faceoff percentage, and ground balls—all three being pivotal statistics for the faceoff position. With a 73 percent faceoff win percentage on the season, 175 total ground balls, and four points (one goal and three assists) on the season, Gurenlian was a force all over the field doing a bit of everything for the first place Lizards.

“This award cannot have gone to a more deserving person,” said New York Lizards Head Coach, Joe Spallina. “He shows class on and off the field and has a true respect for the game.”

In addition to the 2015 Sportsmanship Player of the Year Award, Gurenlian was the recipient of the 2014 FOGO Award as the League’s premier faceoff specialist. He is a founder of The Faceoff Academy along with Chris Mattes and fellow Lizard Jerry Ragonese, which was established to provide instruction on every component of the faceoff at an elite level.

“This is a huge honor,” said Gurenlian. “We teach our kids at a young age about sportsmanship – that no matter how hard you hit, you help the guy up. We have to act accordingly, and to be recognized as someone who does this, especially as a coach, means a lot to me.”

A Penn State graduate, Gurenlian will take the field again with the Lizards this Saturday, August 1st as the team takes on the Boston Cannons in the MLL semi-finals. The game will be played at James M. Shuart Stadium, with the opening faceoff coming at 6:30p.m. Tickets to the game can be bought at www.NYLizards.com/Playoffs or by calling 1-855-NYLIZARDS.

The winner of that game will go on to play in the MLL Championship game on Saturday, August 8th in Kennesaw, GA at 7:00 p.m.

For more information on the New York Lizards and for tickets fans are encouraged to click on the link seen here: