For 21-1 (63.6 KO%) Julian “Hammer Hands” Rodriguez, 13 months could feel like 10 years. In his last bout back in June 2021 he experienced his first loss, an 8th round corner stoppage to (then) 28-3 Jose Pedraza due in large part due to an injury prior to the match. Now on July 29 at the American Dream Mall in East Rutherford New Jersey he’s set to headline against 11-10-1 Jeremy McLaurin out of Minnesota in a match designed to build him back up and get a shot at the Super Lightweight title. But Rodriguez, who 100% believes he’s ready, does not take the match lightly despite his McLaurin’s record. “My opponent is on the taller side, has a longer reach, but we have a game plan. Body strengthening & realigning myself with the sport of boxing.”

1495Sports is proud to bring the following video of Julian “Hammer Hands” Rodriguez in a private work out he had. Video shot by Scott Churchson

Working through Abella Promotions and living in New Jersey between Hoboken and Hasbrouck Heights and now in North Arlington (so he and his children can spend time with his grandparents, both in their 80s), headlining locally is a huge moment for the former amateur once ranked #1 in the country. “I wanted to do this for my people! The last three, four years due to the pandemic my fights have been in Vegas and Vegas is cool and everything but there’s nothing like home and the Jersey atmosphere.”

Training out of True Warriors Boxing in Paterson, a bustling gym that gives Julian the environment to train in a way that feels natural to him. As a child his father Alex would take him to quieter gyms, something that they quickly learned didn’t suit the duo. “No, no Dad! I like the bags to be full, I want two other kids hitting when I’m hitting, he likes it.”

1495 Sports is proud to bring the following photos: 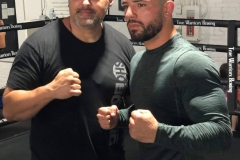 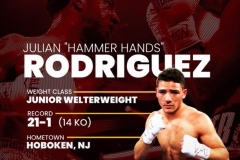 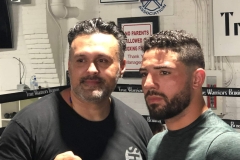 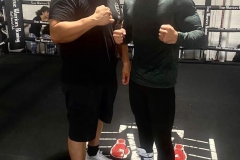 What’s unusual about this event is it’s location. The American Dream Mall, now the second largest mall in the U.S., is converting the ice skating rink into an arena. If this event goes well, it may begin a new era for NJ boxing. However none of that matters to Rodriguez. “Once you go in there, it’s tunnel vision, I don’t hear anyone else’s voice except my Dad (who is his corner man also) and I don’t see anybody else.”

For tickets & more information about the event, check it out below: