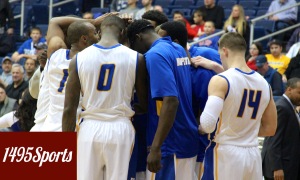 It may be early January and only two games into the Colonial Athletic Association slate, but two CAA heavyweights will meet this week with plenty on the line as Hofstra and Northeastern face each other in a home-and-home series with both being 2-0 in league action.

The two teams will meet on Thursday at 5 p.m. at the David S. Mack Sports and Exhibition Complex before finishing the week on Saturday at 12 p.m. at the Cabot Center.

This week’s games will be a rematch of the last two CAA Championship games with the Pride capturing their first CAA title this past March with a 70-61 win.

Hofstra is 6-3 overall and 2-0 in league play following a weekend sweep of William & Mary. The Pride has won three straight games and five of its last six contests. Jalen Ray, who had 21 points in Sunday’s win, leads the team with 17.9 points per game, while Tareq Coburn is second with 16.9 points per outing. Isaac Kante, who has four straight double-doubles, is averaging 13.4 points and 11.4 rebounds per game.

Northeastern won its two games against Elon over the weekend to improve to 3-5 and 2-0 in conference action. Tyson Walker and Jahmyl Telfort both average in double figures for the Huskies with averages of 16.3 and 12.6 points per game, respectively. Shaquille Walters leads Northeastern with 6.9 rebounds per outing.

Hofstra leads the all-time series with Northeastern, 26-23. The Pride won all three meetings a season ago, including the aforementioned win in the conference tournament. The two regular season wins came by a combined six points.

The games are closed to the public. There are no tickets available.

For more information on the Hofstra University Athletics Department fans are encouraged to click on the link seen here: