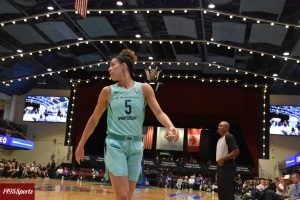 The New York Liberty (0-5) have been tested so far going up against some of the best teams in the league, now it is time to see how they fare against the reigning WNBA Champions the Washington Mystics (3-2) in women’s basketball action tonight (8/7)

New York has been seeing some huge improvements as a team, growing with every single game, just have not been able to figure out the right combination they need to pick up a victory in what is an ultra tough league in the WNBA.

In their last game against the Minnesota Lynx the ladies had a really tough 92-66 loss on August 5. The Liberty were able to have such a strong first quarter with 22 points, Minnesota was able to string together an incredible third quarter frame where they were able to outscore the Liberty 27-6.

Leading the way on the offense for New York was Liberty center Amanda Zahui B, who finished with a season-high 13 points (3-5 3PT), 6 rebounds and career-high 4 steals. New York who is currently building around their core of younger talent has really had a chance to see the newest additions shine as Leaonna Odom, Kylee Shook and Megan Walker surpassed or tied their career-highs in points with 10, 9 and 8, respectively in the game against Minnesota.

Continuing to shine for the New York offense was Kia Nurse, who added 10 points and 3 assists for her second-consecutive game in double-digit scoring figures since returning from her ankle injury.

The Washington Mystics, despite missing the talented trio of Natasha Cloud, Elena Delle Donne and Tina Charles, have had a successful 2020 campaign thus far at 3-2. The Mystics are coming off a Wednesday night loss as well, where they fell to the Las Vegas Aces, 83-77

The Mystics offense in the game against the Aces was led by 2019 WNBA Finals MVP, Emma Messeman, who had 24 points, 13 rebound double-double in the loss. Myisha Hines-Allen also added a double-double of 18 points and 10 boards.

The history of play between New York and Washington has always been a friendly but intense one as over the past two seasons, Washington has gone 6-0 against New York. The Mystics currently have a seven-game win
streak in total against the Liberty. Despite the Liberty’s recent struggles against the Mystics, New York still holds the advantage in the all-time head-to-head series, 46-37 (.554).

The game is scheduled to air on the ESPN2 network with the action scheduled for 7:00 pm.

Here are some New York Liberty Milestones to watch for:

Amanda Zahui B – Approaching 100 WNBA career blocks, she currently has 98. Zahui also has 809 career points and 488 rebounds.
Kia Nurse – Currently sits at 806 total career points.
Kiah Stokes– Has 167 career blocks and is the franchise leader and single-game leader in blocks (8, vs. Connecticut 07/16/15).

For more information on the New York Liberty fans are encouraged to click on the link seen here: