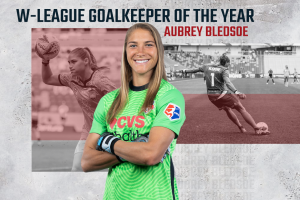 Photo Compliments of the Washington Spirit

Washington Spirit and Sydney FC goalkeeper Aubrey Bledsoe was named the co-2019-2020 Goalkeeper of the Year along with Melbourne City goalkeeper Lydia Williams for the Westfield W-League on Thursday evening at a virtual Dolan Warren Awards ceremony in Australia.

This is the second-consecutive season Bledsoe has earned the honor after also winning in the 2018-2019 season, in which she was crowned W-League Champion after winning the W-League Grand Final with Sydney FC.

Bledsoe said this on the honor: “It’s really gratifying to win this award again, especially coming off of my 2019 NWSL Goalkeeper of the Year season. I want to continually improve my game and be a steady presence in the net, so this shows I’m on the right path.”

“I’ve loved playing for Sydney FC over the past three years,” Bledsoe continued. “I’m incredibly grateful for the club, my teammates, and everyone I met who helped me develop as a player and person. Playing in Sydney has helped me stay at the top of my game as another avenue to challenge myself, and there’s no place more beautiful than Sydney, Australia!”

The Cincinnati-native joined Sydney FC for her third season in Sky Blue following the conclusion of the 2019 NWSL regular season. Bledsoe started all 14 games for Sydney, racking up a total of 60 total saves, with 51 in 12 regular-season appearances and nine in two playoff appearances. Additionally, Bledsoe had a 0.811 percent save-rate in the regular season and playoffs.

Bledsoe’s 51 regular-season saves and eight clean sheets were good for second-best in the W-League in both categories.

In addition to winning the Goalkeeper of the Year award in the W-League for both the 2018-2019 and 2019-2020 seasons, Bledsoe was also awarded the 2019 NWSL Goalkeeper of the year award last November following a vote comprised of club officials, players, coaches, media and fans.

For more information on the Westfield W-League fans are encouraged to click on the link seen here: