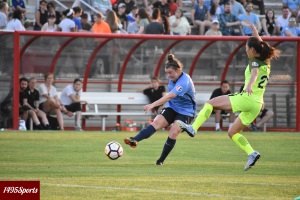 Sky Blue FC (0-14-4, 4 points) returned to National Women’s Soccer League (NWSL) action on Saturday, falling to the Houston Dash (7-8-5, 26 points) by a count of 2-1 at Yurcak Field. Putting forth a spectacular performance for Sky Blue FC was goalkeeper Kailen Sheridan who recorded nine impressive saves on the evening.

“Defensively, we struggled to find spaces between the lines in the first half, and we had some lapses in our timing when it came to defending as a unit,” said Denise Reddy, Sky Blue FC head coach. “Offensively, our attacks were very short and direct, which is not how we want to play as a team. In the second half, we played with more aggression and determination on the offensive end, and we were much more disciplined defensively. We showed a great deal of resolve with our second half performance.”

Houston opened the scoring in the 7th minute of play, as Kealia Ohai gained possession and headed down the left flank. She then cut inside before centering a ball into the box, where Rachel Daly was there to provide the finish and make it a 1-0 contest.

In the 29th minute, Sky Blue FC nearly found its equalizer. On that sequence, Raquel Rodriguez intercepted a pass on her offensive side of the pitch before stepping around a defender and playing Savannah McCaskill on her left. McCaskill then one-timed a ball with the outside of her right foot that split two defenders and found Imani Dorsey racing into the penalty area. Dorsey slightly dummied the ball before rifling a shot with her right foot that forced a diving save from Dash netminder Jane Campbell. McCaskill collected the rebound, but her ensuing shot was high of the target.

Sheridan recorded five saves in the opening half to keep this one close, and the 1-0 tally remained when these two sides broke for intermission.

In the second half, Sheridan picked up right where she left off, and the 53rd minute saw her make another key stop for her team. On the play, a through-ball was sent to a racing Veronica Latsko, who sped into the 18 where she met Sheridan in a 1v1 situation. Latsko was able to take two full touches in stride before firing a right-footed shot, but Sheridan was able to come up with another huge save to keep it clean of the net.

Soon after that denial, Sky Blue FC was able to level the count in the 65th minute. From the back, Mandy Freeman played Rebekah Stott on her right side, and Stott then placed a delivery upfield for Katie Johnson. After stepping around a defender, Johnson turned inside and fed Rodriguez near the end line. Rodriguez then played McCaskill, who struck a one-timer on frame that Campbell kick-saved. However, Madison Tiernan was there to claim the rebound and quickly put away an equalizer that evened the score at one goal apiece.

The action continued to go back-and-forth over the remaining portion of the second half, but Houston eventually garnered an opportunity for a game-winner when a handball infraction inside the box awarded them with a penalty kick. Stepping over the try was Daly, who was able to convert and make it a 2-1 tally in favor of the visiting side.

Sky Blue FC once again went into heavy pursuit of an equalizer, and Sheridan continued to deliver some pivotal saves on the back end for her team. However, the 2-1 score would remain when the final whistle was blown, with Houston taking home the result.

Sky Blue FC will return home to Yurcak Field next Saturday, August 18, hosting Utah Royals FC for a 6:30 p.m. kickoff at its Health and Wellness Night. Tickets for that game are available now online or by calling 888-SBFC-TIX (888-723-2849). Prior to kickoff, Sky Blue FC is partnering with Grassroot Soccer and EDP Futures for a youth soccer event, and the team will be wearing co-branded shirts of the three brands during warm-ups. Those shirts will then be autographed and auctioned during the game to benefit Grassroot Soccer.

For more information on Sky Blue FC and for tickets to upcoming games fans are encouraged to click on the link seen here: