Posted by Stacy Podelski on July 1, 2018 in New York Sports 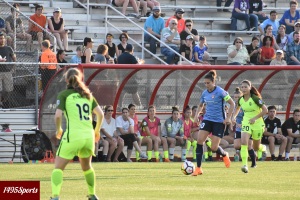 “We were playing on heavy legs and started a bit too slowly tonight,” said Denise Reddy, Sky Blue FC head coach. “We were being a little too defensive, and it felt like we were chasing the game after giving up the early goal. However, we stepped up as an 11 in the second half. We were playing at a much higher level, and definitely with a greater effort as well.”

Utah Royals FC opened up the scoring in the 7th minute, as Katrina Gorry played a ball into the box from the right flank. The feed was initially deflected by Gunnhildur Jonsdottir before rolling onto the feet of Christen Press, who finished and gave the hosts a 1-0 advantage.

The lead was extended to 2-0 in the 25th minute after Samantha Johnson gathered possession in the midfield and played Press, who struck a through-ball into the penalty area. The recipient of the distribution was Katie Stengel, and she was able to chip the feed into the back of the net.

The final tally of the first half occurred on a free kick opportunity in the 28th minute. Gorry struck the ball towards the far post, and Stengel was there to score a header that made it 3-0 in favor of Utah Royals FC.

Sky Blue FC was able to pull one back in the 62nd minute of this contest, as Sarah Killion picked off an errant pass in the midfield and headed it towards Janine Beckie. Upon receipt of the ball, Beckie sped towards the final third before playing Shea Groom into the penalty area. Groom then cut back on a defender and fired a shot that was kick-saved by Utah Royals FC goalkeeper Abby Smith. Collecting the rebound was Imani Dorsey, who one-touched a feed for Lloyd on top of the 18. Falling backwards, Lloyd was still able to maintain her balance well enough to send a left-footed curler into the left-side netting. The assist on the play by Dorsey was her first professional point.

Sky Blue FC was able to create additional chances over the final half-hour of this match-up, but the 3-1 score line remained when the final whistle was blown.

Sky Blue FC will now return home to Yurcak Field next Saturday, July 7, to host the Chicago Red Stars for a 7 p.m. kickoff. Tickets for that match, which will be Kids Club Night, are available now online or by calling 888-SBFC-TIX (888-723-2849). The team is also offering a special Hat Trick Package where fans can save 25% off all three July home matches.

For more information on Sky Blue FC and for tickets to upcoming matches fans are encouraged to click on the link seen here: