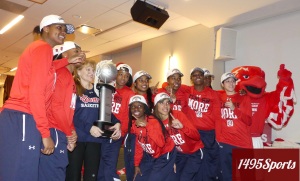 On March 14, 2016 the St. John’s Women’s Basketball team along with supporters, administrators and staff all gathered in the D’Angelo Center to see where they will head for the First Round of the NCAA Tournament.

The Red Storm had just won their first  BIG EAST title in nearly three decades, and everyone had gathered to not only celebrate the amazing accompliments but also see who the team would face.

No time was wasted as the ladies were chosen to head to the Dallas Regional as the Number 8 Seed. The first team they will face in the Waco, Texas Area will be Number 9 Auburn.

This will be the third meeting between these two teams, but things have changed and evolved for both since the last they met.

During the 2016 BIG EAST Tournament, the St. John’s Women’s Basketball team learned how each of the players on the team would fit into the system that they have in place.

This fact will be a huge factor for them going into the NCAA Tournament, as the Red Storm will not only need team play, but also defense to advance far into the Tournament.

These ladies are not only playing for themselves, but also representing the University, along with playing for their Athletic Trainer Jill Christensen has been batteling cancer.

The phrase Play For More is seen on all the shirts the teams are wearing heading into the NCAA Tournament, but for the St. John’s Women’s Basketball team it will have extra meaning.

The journey starts this Friday, in Waco, Texas against Auburn. Ladies and Gents let the Dancing and the NCAA Women’s Basketball Championship Tournament begin.

1495 Sports is proud to bring the following photo gallery:

Fans are also encouraged to check out the following videos:

For more information on the St. John’s Women’s Basketball team fans are encouraged to click on the link seen here: