Heartbreak for New York City FC in loss to Columbus 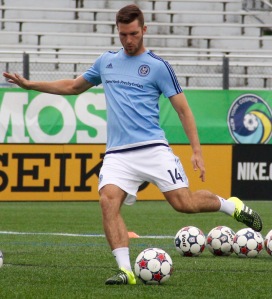 With only seven games left in the Major League Soccer Season, and three at Yankee Stadium the guys on New York City FC could have used a win against the Columbus Crew SC.

Instead they suffered heartbreak in a 2-1 loss and now find themselves a team with their back against the walls.

Now is a measure of what this team is truly made of, and the gauntlet was thrown down by Head Coach Jason Kreis,  who wondered during his Post-Match Press Conference who on the team is wanting to be a part of the club.

One player was Forward Patrick Mullins, who was obviously disappointed, upset and frustrated with this most recent result.

Mullins reflected on the loss and more all can be seen on the 1495 Sports NYCFC Post-Match interviews seen below.

Mullins, who was a key part of New York City FC obtaining a goal in the First Half, as he connected with Andrew Jacobson to tie things up. 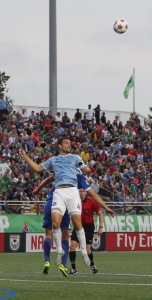 For Jacobson, the goal was his first for NYCFC (while also being the first innearly two years) and one that got the sell-out crowd at Yankee Stadium buzzing.

The home team had plenty of opportunities during the course of the match to even things up and maybe even win the match, sadly on this day though the ball did not go into the cage.

As for Columbus Crew SC, they had goals from Fernando Higuaín and Justin Meram, to earn vital points on the road.

New York City FC will have a week off before returning to the pitch for an away match at FC Dallas in the FC Dallas Stadium on September 12.

The boys in blue will return back to Yankee Stadium on September 16, when they host Toronto FC for a match that is set to start at 7:30 p.m.

1495 Sports is proud to bring the following post-match video:

For more information on New York City FC and for tickets to upcoming matches fans are encouraged to click on the link seen here: