Posted by Stacy Podelski on July 24, 2015 in New York Sports 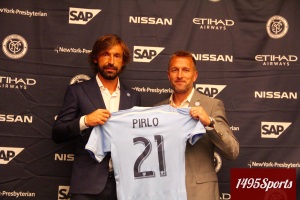 Thursday, July 23 is going to be a day that New York City FC fans will probably not forget. After the many rumors of who the final desginated player spot, the dream of having a top notch player became a reality.

And not just any top notch player Andrea Pirlo, who has already trained with the club and is quite anxious to make his first start.

And that was just only a chunk of what Andrea has done while he was overseas.

Now it is time to see what he can do on American Soil and against players in Major League Soccer. Pirlo is going to be one of many that hope to disprove the myth of MLS being a place for retiring stars from other leagues. 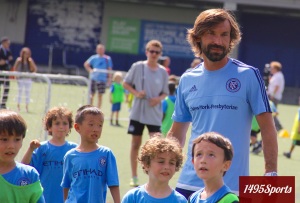 Aside from training one of the first official impact for Andrea was made, as the newest member of NYCFC took time to visit Downtown United SC at Pier 40 on what was a beautiful July day in New York City.

The newest midfielder got a chance to pass the ball around with the youngsters in attendance going to each station and spending a good amount of time with all.

It will be interesting to see when Head Coach Jason Kreis gives not only Pirlo but also Frank Lampard the start for NYCFC, and where he will use his two newest Midfielders.

Either way both Pirlo and Lampard both seemed focused and ready to go. The next match for New York City FC will be against Orlando City SC at Yankee Stadium on July 26.

Though it hasn’t been announced officialy yet, the buzz and excitment for the two newest additions in Pirlo and Lampard is there.

For the photo gallery and video from the Andrea Pirlo Press Conference fans are encouraged to click on the link seen here:

For the photo gallery and video from Pirlo’s visit to Downtown United SC Fans are encouraged to click on the link seen here: