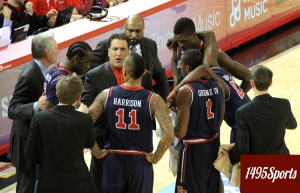 St. John’s Director of Athletics Chris Monasch announced Friday that Steve Lavin and the University have mutually agreed to part ways after five seasons leading the men’s basketball program. A national search for his successor is underway.

“Coach Lavin returned high expectations to our men’s basketball program and represented St. John’s in a positive way,” said Monasch. “We appreciate his commitment to the program and to our student-athletes over the past five years. Our student-athletes represented the University well, especially our five-member senior class who excelled on the court, inside the classroom and within the community.”

“I enjoyed celebrating our student-athletes’ accomplishments in my first year at St. John’s,” said Conrado “Bobby” Gempesaw, Ph.D., President, St. John’s University. “We look forward to building on this foundation as we strive to continue the tradition of success that the St. John’s basketball program has achieved for more than 100 years.”

Lavin was named the 19th head men’s basketball coach in program history on March 30, 2010. St. John’s went 21-12 in 2014-15 to earn an at-large bid to the NCAA Tournament as the No. 9 seed in the South Region. It was the 85th winning season in program history, while the 21-wins matched the most victories of The Lavin Era. The Red Storm’s season concluded with a 76-64 setback to eighth-seeded San Diego State on March 20 in Charlotte.

Lavin mentored two BIG EAST Rookies of the Year, two Most Improved Players, a Defensive Player of the Year and Sixth Man of the Year over his five years of service at St. John’s. The four-year members of St. John’s nationally ranked 2011 recruiting class – D’Angelo Harrison (2,178), Phil Greene IV (1,243), Sir’Dominic Pointer (1,078) – each scored more than 1,000 points in their careers and are on schedule to earn their degrees in May with fellow seniors Jamal Branch and Khadim Ndiaye.

“In life change is inevitable, so I take the long view. I’m grateful for my time teaching at St. John’s University,” said Lavin. “I will take with me the lasting friendships forged during my tenure as Head Coach. I’m proud of our results both on and off the court – in particular our memorable runs to the NCAA tournament in 2011 and 2015. Most importantly, I take pride in our performance in the classroom having graduated our student athletes who will represent the institution in a first class manner.”

One of the storied program’s in men’s collegiate basketball, St. John’s is the eighth all-time winningest program in NCAA Division I with 1,795 wins and 956 losses. The school’s .652 winning percentage is top-10 in NCAA history and the 28 NCAA Tournament appearances are in the top-25. St. John’s has made 28 appearances in the NIT winning five championships. Helms Foundation national champions following the 1910-11 season, St. John’s appeared in NCAA Final Fours in 1952 and 1985. The program boasts 11 consensus All-Americans, 58 NBA Draft picks and 50 players who have scored 1,000 career points or more.

For more information on the St John’s Men’s Basketball team fans are encouraged to click on the link seen here: